Future Stories
BY ORDER OF PRESIDENT TRUMP
THE RULES OF ENGAGEMENT (ROE), ARE A  POLITICAL DISEASE OF DEATH IN WAR - THEY HAVE BEEN CHANGED TO SAVE THE LIVES OF OUR SERVICEMEN'S AND WOMEN
SEPARATION OF CHURCH AND STATE
THE IGNORANCE OF POLITICAL CORRECTNESS
ATLAS SHRUGGED - WE'RE ALREADY THERE!
WILL PRESIDENT TRUMP BE GIVEN THE CHANCE TO SAVE US?
MEXICAN-AMERICAN
AMERICAN OF MEXICAN (or HISPANIC) DESCENT
HOW ABOUT JUST PLAIN AMERICAN

America allows people to come here, but, at our sufferance. In the past, those dreaming of coming to America wanted to become Americans. They wanted to live the American dream, to assimilate; they did not come to America to make a little Mexico out of California, New Mexico, Arizona or Texas or any other state. The rationale of illegals and their supporters being that these areas once belong to Mexico and therefore they are entitled or deserve entitlements in America. Other illogical, bumptious, nonsense is that of claiming America is a nation of immigrants and that anyone must be allowed entry.

This chart shows the cost to taxpayers, in every state, totaling over 40 billion dollars that went to support illegal aliens and their children last year. These state expenses to the taxpayer do not include the billions of federal tax dollars necessary to support illegals in America. There are numerous essential projects and expenses for which these billions could be used; one example would be dental care for all veterans. Currently, only those veterans who have been in combat received dental care. We seem to forget that those also served who stand and wait. What about prosthetics and aftercare for those who have lost limbs while serving rather than having the servicemen and women depend on civilian organizations like the Wounded Warrior Project to get needed help. It seems, however, that America would much rather take care of illegals rather than the servicemen and women who provided us with our freedoms. Is there any need to mention that we have one in five children going hungry every day in America. It doesnt appear we have money to help our children,but, there seems to be sufficient funding to provide for illegal aliens who have no business in America, etc.

Children coming across the border alone are being placed all over America, some even in questionable and dangerous circumstances. These children will then be allowed to remain in America, grow up, and under Chain Migration bring in additional relatives, who probably sent them to circumvent our immigration laws. As unscrupulous as this action is, as recognizable as it is, we are just ignoring it and allowing it to continue to take place. The children must be forced to remain on the Mexican side of the border from where have attempted to cross into America. Mexico is responsible for any non-Mexican who attempts to pass through their country to get to the American border so that if America refuses these children or any others who try to enter America, they will be returned or refused entry.
The immigration situation in America is fraught with ignorance,  stupidity, indulgence, political agendas, social, and nationalistic chicanery; all of which are detrimental to our American way of life. Our tolerance and patience have allowed some 10,000 MS-13 criminals, vicious, sadistic murderers, into our country. We know where these people are and their intentions toward America, so why hasnt our government rounded up these criminals and deported them?
These illegals show up on television, radio, and in the streets, during protests, while making demands and law enforcement ignores them  something is very very wrong when we see and hear and know the location of these criminals and do absolutely nothing. This lack of inaction merely encourages even more of their criminality to continue while others march during protests and fly Mexican flags snubbing their noses at our laws and the American people - all while making demands, not asking but demanding we give them what they want - simply outrageous. 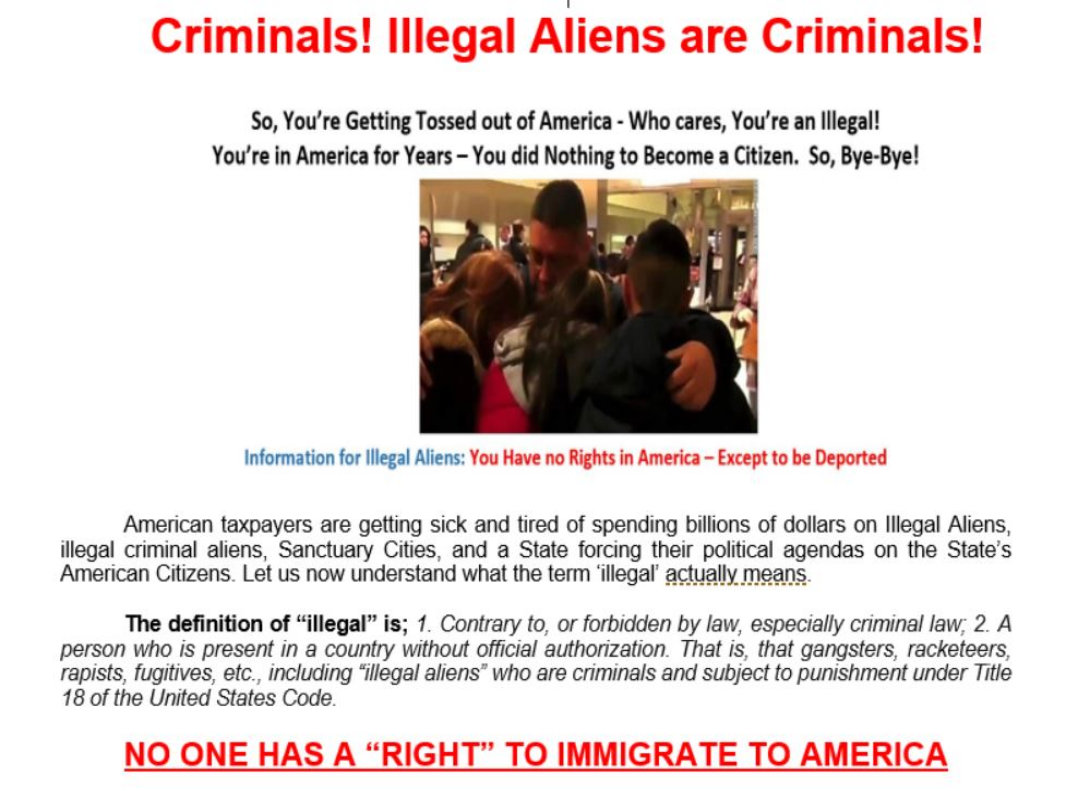